Social media outpaces print newspapers in the U.S. as a news source 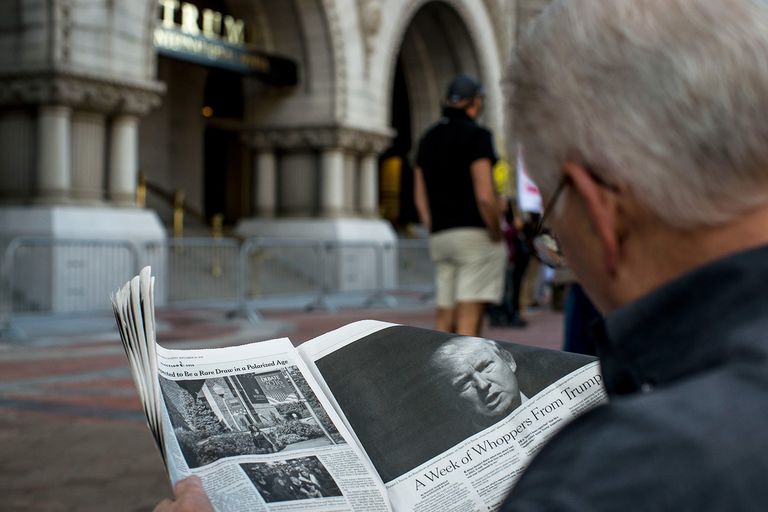 Social media outpaces print newspapers in the U.S. as a news source
Share This

Social media’s small edge over print emerged after years of steady declines in newspaper circulation and modest increases in the portion of Americans who use social media, according to a Pew Research Center survey conducted earlier this year.

Overall, television is still the most popular platform for news consumption – even though its use has declined since 2016. News websites are the next most common source, followed by radio, and finally social media sites and print newspapers. And when looking at online news use combined – the percentage of Americans who get news often from either news websites or social media – the web has closed in on television as a source for news (43% of adults get news often from news websites or social media, compared with 49% for television).

Among the three different types of TV news asked about, local TV is the most popular – 37% get news there often, compared with 30% who get cable TV news often and 25% who often watch national evening network news shows.

Television dominates as a news source for older AmericansNews diets differ drastically for younger and older Americans. Age gaps that have long been notable have now widened substantially, with those 65 and older five times as likely as 18- to 29-year-olds to often get news from TV. A large majority of those 65 and older (81%) get news from television often, as do about two-thirds (65%) of those 50 to 64. Far fewer young Americans are turning to television news, however – only 16% of those 18 to 29 and 36% of those 30 to 49 get news often from television.

The age divide is nearly as large for social media, but in the other direction: Those 18 to 29 are about four times as likely to often get news there as those 65 and older.

Print’s popularity only persists among those 65 and older. Among the oldest age group, about four-in-ten (39%) get news there often, but no more than 18% of any other age group do.

Online news websites are more popular among those ages 30 to 49. About four-in-ten (42%) in this age group get news often from websites and news apps. About a quarter (27%) of 18- to 29-year-olds get news from news websites, making it the second most commonly used platform for news for that age group. For these youngest adults, social media is the most popular news platform – 36% get news there often, topping news websites, TV (16%), radio (13%) and print (2%).

Younger Americans are also unique in that they don’t rely on one platform in the way that the majority of their elders rely on TV. No more than half of those ages 18 to 29 and 30 to 49 get news often from any one news platform.