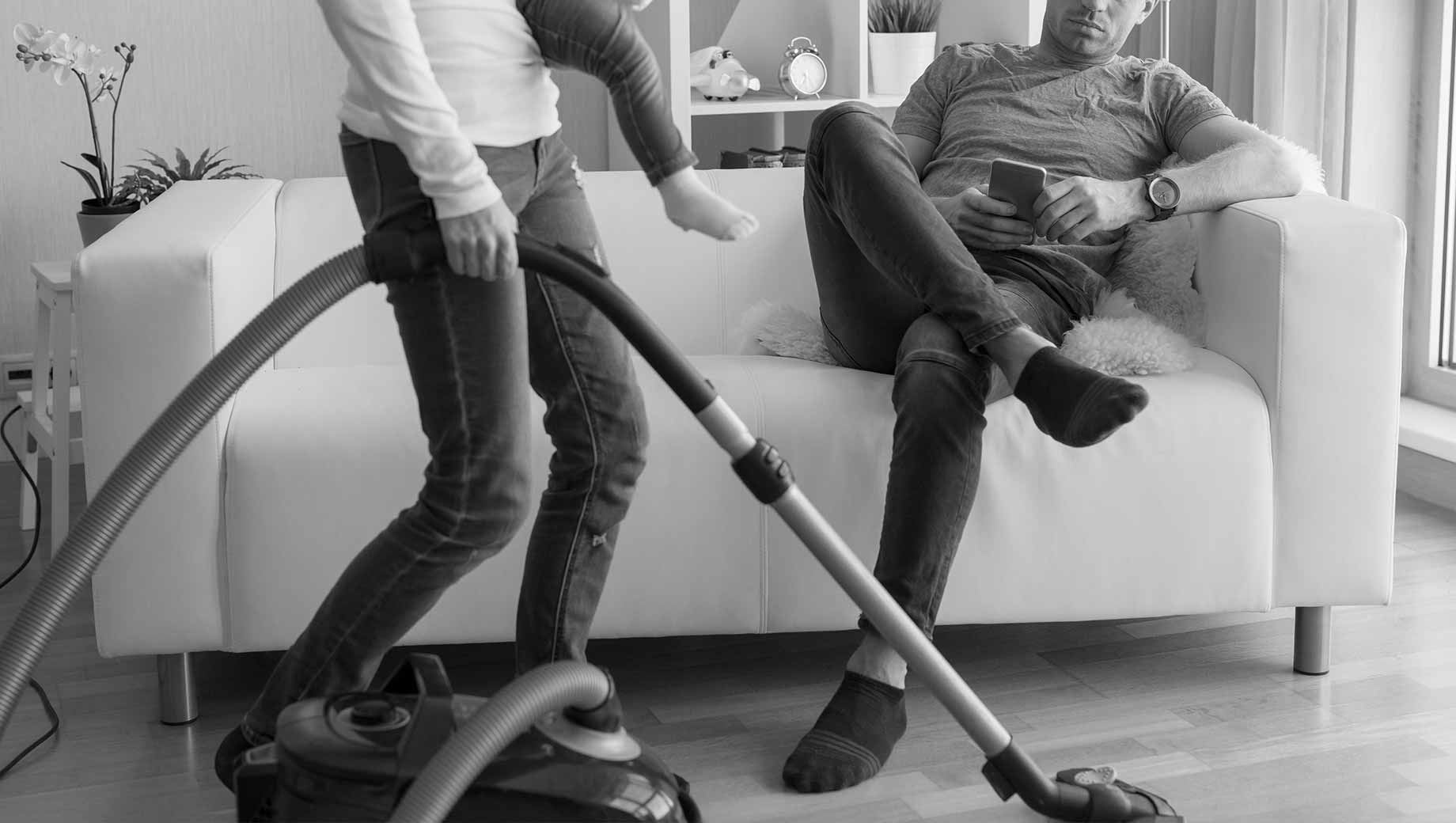 Although women comprise nearly half of the U.S. workforce, they still fulfill a larger share of household responsibilities. Married or partnered heterosexual couples in the U.S. continue to divide household chores along largely traditional lines, with the woman in the relationship shouldering primary responsibility for doing the laundry (58%), cleaning the house (51%) and preparing meals (51%). At the same time, men continue to take the lead in keeping the car in good condition (69%) and doing yardwork (59%). 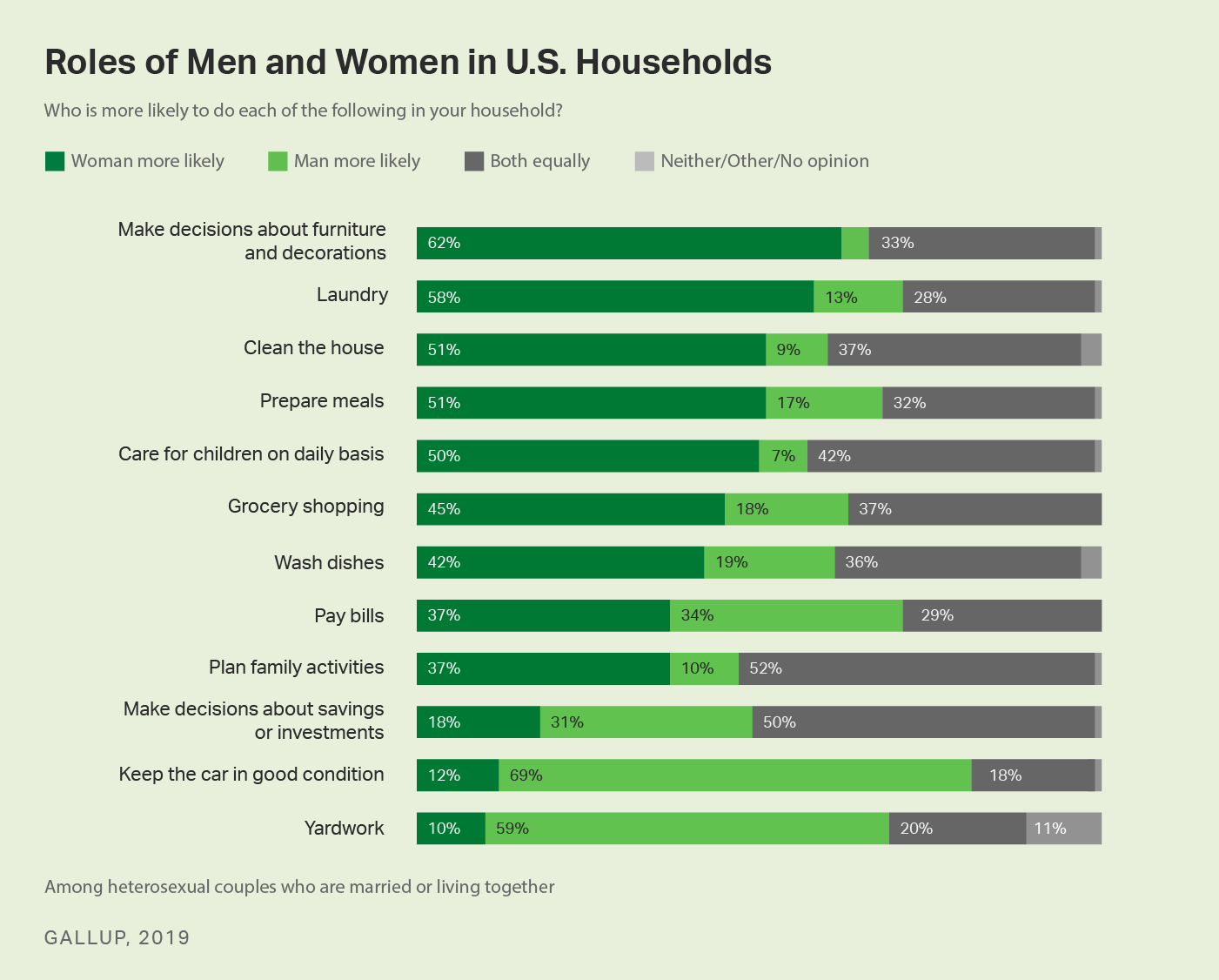 In addition to laundry, cleaning and cooking, women are the primary decision-makers when it comes to home decor in 62% of households. Although there is more equity in some of the other tasks, women are also much more likely than their husbands to care for children on a daily basis, shop for groceries and wash dishes.

There is only one task that men and women are equally likely to take the lead on -- paying bills. In 37% of U.S. households, the woman primarily pays the bills, while in 34% of households, the man does.

Planning family activities is the only task that is reported as being shared equally by a majority, 52%. In households that don't share the job, women are more likely to be responsible (37%) than are men (10%).

Half say that decisions about savings or investments are shared equally, but in most other households (31%), it's the man making these decisions.

These latest readings, based on combined data from three polls conducted in mid-2019, mark the third time that Gallup has asked married and cohabitating couples to report who is most likely to perform various tasks in their household. The previous readings were in 1996 and 2007. Analysis of the 2019 data is limited to heterosexual couples (97% of the sample) to facilitate comparison with past data collected before same-sex marriage was legal.

Distribution of Household Tasks Has Become More Equitable Since 1996
Although women remain more likely than men to perform most of the duties at home, this has declined in some cases over the past two decades. Since 1996, women have become less likely to be the primary partner handling grocery shopping (down 14 percentage points), laundry (down 12 points), cooking (down 12 points), dishwashing (down 11 points) and cleaning (down nine points). These shifts are accompanied by some combination of increases in the percentage of men primarily performing the tasks or sharing the work equally with their partners.

Women also have become less likely to be the main spouse to pay bills as more have said this job is now shared equally between partners. 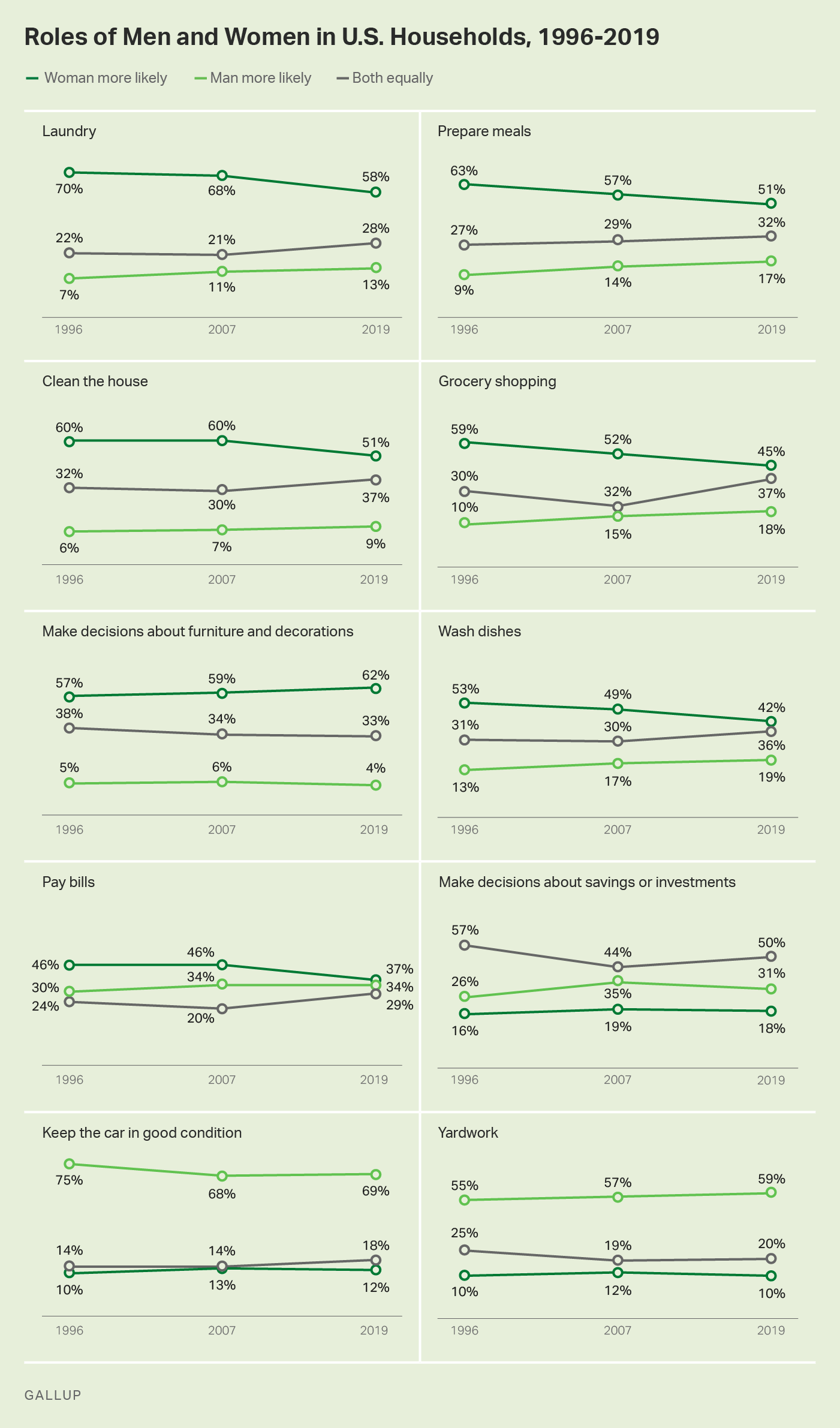 Over the same period, men have become more likely to take over the decision-making about savings or investments (up five points), and they have steadily remained most likely to keep both the car and yard in good condition.

The above findings are based on the views of all married or cohabitating heterosexual couples. However, perceptions about who does what differ sharply by gender. Specifically, for eight of the 12 tasks -- caring for children, cleaning the house, preparing meals, washing dishes, grocery shopping, paying bills, planning family activities and making decisions about savings or investments -- men and women are each more likely to say that they personally perform an equal or larger share of the work than their partner does.

Parents' Household Tasks Tied to Employment and Earnings
Although mothers are more likely than fathers to say they perform most of the housekeeping chores, the division of labor among parents with at least one child under the age of 18 at home varies largely on each parent's employment situation and earnings.

For example, among parents in single- and dual-income households:

And when looking at parents' individual earnings in dual-income households:

In households where the father earns more than his wife, the wife is more likely to take the lead on the core housekeeping tasks of laundry, cooking, cleaning, dishwashing, grocery shopping, decorating and childcare. When the mother's income is higher than her husband's, he takes on a greater role in all of these tasks.
When both parents earn roughly the same income, men are more likely to help with taking care of children, washing dishes and cleaning.
In households where one parent earns more than the other, that person is more likely to be responsible for paying the bills, but long-term financial decisions about savings or investments are most likely to be shared regardless of who the chief earner is.

Women with a college degree are slightly less likely than women without one to be solely responsible for several domestic tasks, including laundry, cleaning, washing dishes and caring for children. This may be because women with a college degree are much more likely than those without one to be working full time and thereby sharing the household responsibilities more.

Men with a college degree are more likely than those without one to be solely responsible for the family's finances -- both paying bills and making decisions about savings or investments.

As was the case in 2007, married couples of different ages are strikingly similar in their reports about the division of jobs in their homes.