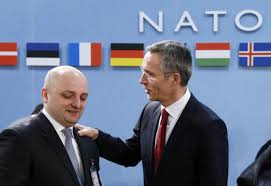 The NATO Secretary General, Mr. Jens Stoltenberg will travel to Tbilisi on Sunday, 24 and Monday 25 March 2019.
Mr. Stoltenberg will have meetings with the President of Georgia, H.E. Ms. Salome Zourabichvili, the Prime Minister, H.E. Mr. Mamuka Bakhtadze, the Chairman of the Parliament, H.E. Mr. Irakli Kobakhidze and other high level officials.

The Secretary General will visit the NATO-Georgia Joint Training and Evaluation Centre (JTEC) together with the Minister of Defence, Mr. Levan Izoria, where he will receive a briefing on the NATO-Georgia Exercise.

In May 2013, Georgia stated its goal to get a Membership Action Plan (MAP) -- a first step toward eventual membership -- for his country from NATO in 2014. However, in June 2014, NATO officials announced that Georgia would not yet be invited to join the MAP process, but that NATO would implement a "substantive package" of cooperation measures with Georgia.

Stoltenberg also thanked Georgia for its contribution to NATO missions in Afghanistan and other places.

The NATO chief thanked Djukanovic, whose country became an alliance member in 2017, for his continued support for the bloc's expansion.

"Mr. President, you are a strong champion of NATO's open-door policy," Stoltenberg told Djukanovic, adding that Podgorica "is promoting stability in the Western Balkans and demonstrating that NATO's door remains open."

At a 2008 summit, NATO agreed that Georgia will eventually become a member, but no firm date has been given, although the membership perspective for the country has been reconfirmed at every summit ever since.

Georgia fought a brief war with Russia in August 2008, and Moscow’s continued military presence on Georgian territory adds to tensions in the region.

Georgian President Salome Zurabishvili stated that the cooperation between her country and NATO is not directed against Russia or any other country, she said at a plenary session of the Georgian parliament in Tbilisi two weeks ago in her annual report on the situation in the country, televised live by the Georgian Public Broadcasting.

A survey conducted by the Caucasus Research Resource Center (CRRC) revealed that twenty-five per cent of those asked named the USA as Georgia’s ‘best friend’. Seven per cent of those surveyed nominated Azerbaijan and Ukraine while six per cent opted for Turkey and Russia, according to JAMnews.

Th survey was funded by the Carnegie Corporation of New York and covered all of Georgia. The Caucasian Barometer is a regional project. Surveys in Azerbaijan, Armenia and Georgia are conducted via the same methodology. The survey was previously done once per year from 2008 – 2012, and starting in 2013, once ever two years.
The surveys were conducted from 23 September through to 10 October 2017. A total of 2 379 individuals were surveyed. The margin of error of the study is two per cent.