In addition to the Akhaltsikhe Municipality, the main procurers of Nukia are the Aspindza City Hall and the public schools of Samtskhe-Javakheti. Since 2011, the company has won 37 tenders altogether, receiving GEL 1,045,922 in total, according to TI. 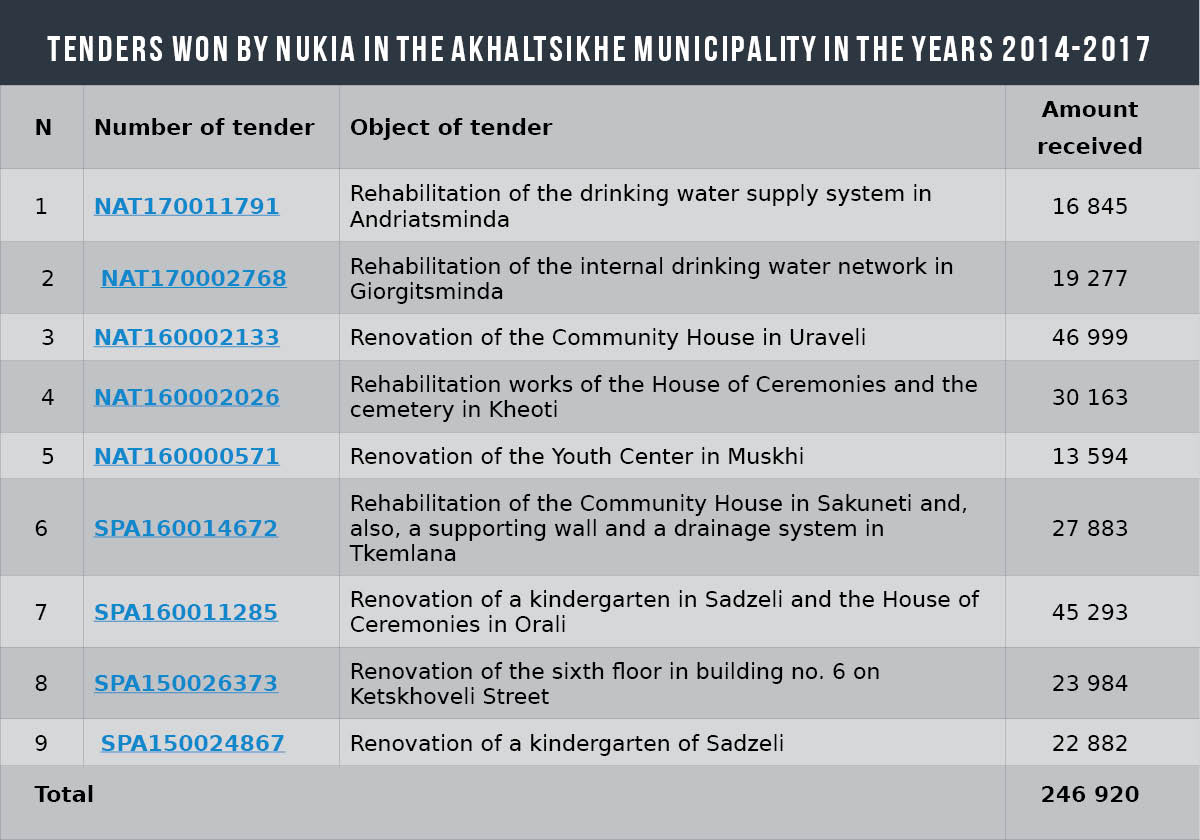 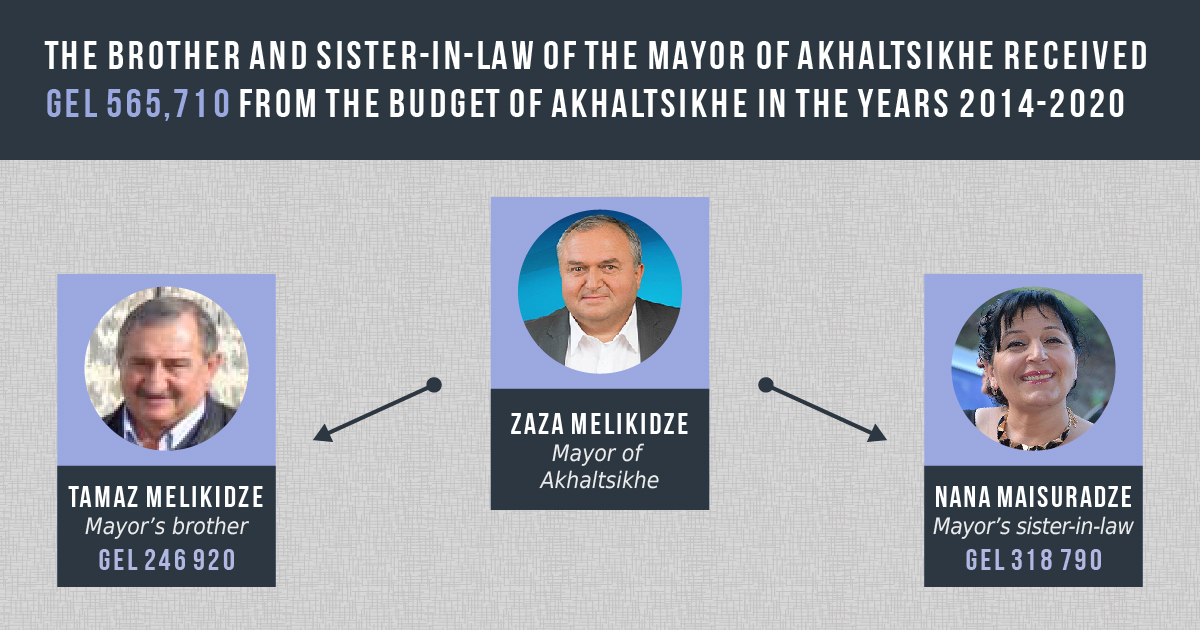 Since the election of Zaza Melikidze as the Head of the Municipal Administration, Nana Maisuradze – the spouse of another brother of his, Tengiz Melikidze, who has the status of a sole entrepreneur – has been winning tenders announced by non-entrepreneurial (non-commercial) legal entities (N(N)LEs) of the Akhaltsikhe Municipality without competition and supplying the said organizations with baked products.

Nana Maisuradze only obtained two simplified procurement contracts: she concluded one of them (worth GEL 252) with Charity House, while Zaza Melikidze concluded another contract (worth GEL 130) with his sister-in-law in person. With this money, Nana Maisuradze was supposed to purchase pastries for IDPs and persons devoid of care living in the territory of the municipality.

In total, since Melikidze’s election as the Head of Municipal Administration, his sister-in-law has received GEL 318,790 from 10 public procurements of the Akhaltsikhe Municipality and its N(N)LEs. 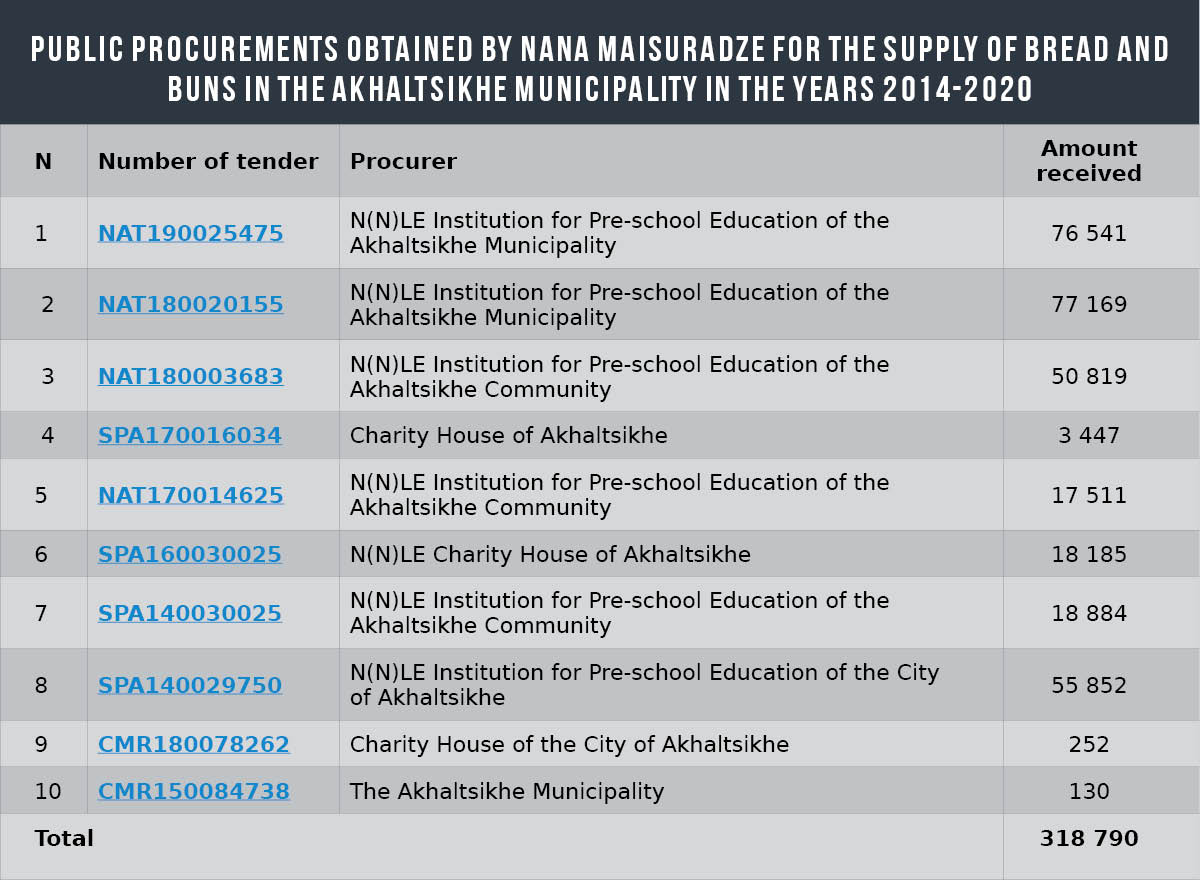 It is noteworthy that since Zaza Melikidze became the head of the local authorities, companies under his ownership have also been winning tenders announced by the Akhaltsikhe Municipality without competition. The Mayor has appointed his wife’s brothers and sisters as directors of these companies. In the years 2014-2019, the limited liability companies of Zaza Melikidze and his brother-in-law received more than half a million lari from the Akhaltsikhe Municipality. TI Georgia published a study about this issue in July 2019. On the basis of the study, the Anti-Corruption Agency of the State Security Service launched an investigation under the article of exceeding of official powers.

Tenders won by a brother of Mamuka Melikidze, Chairperson of the City Council of Aspindza, in the Aspindza Municipality

Mamuka Melikidze has been the Chairperson of the City Council of Aspindza since 2014. For some time before being elected to this office, he was the financial director of JSC 21st Century, the construction company of his brother, Malkhaz Melikidze.

Before Mamuka Melikidze became a public official, his brother’s company didn’t take part in the tenders of the Aspindza Municipality. But since Mamuka Melikidze became the Chairperson of the City Council, JSC 21st Century has taken part in 14 tenders announced by the Aspindza Municipality and won 5 of them, receiving GEL 740,065 from the budget of Aspindza in the years 2016-2019. 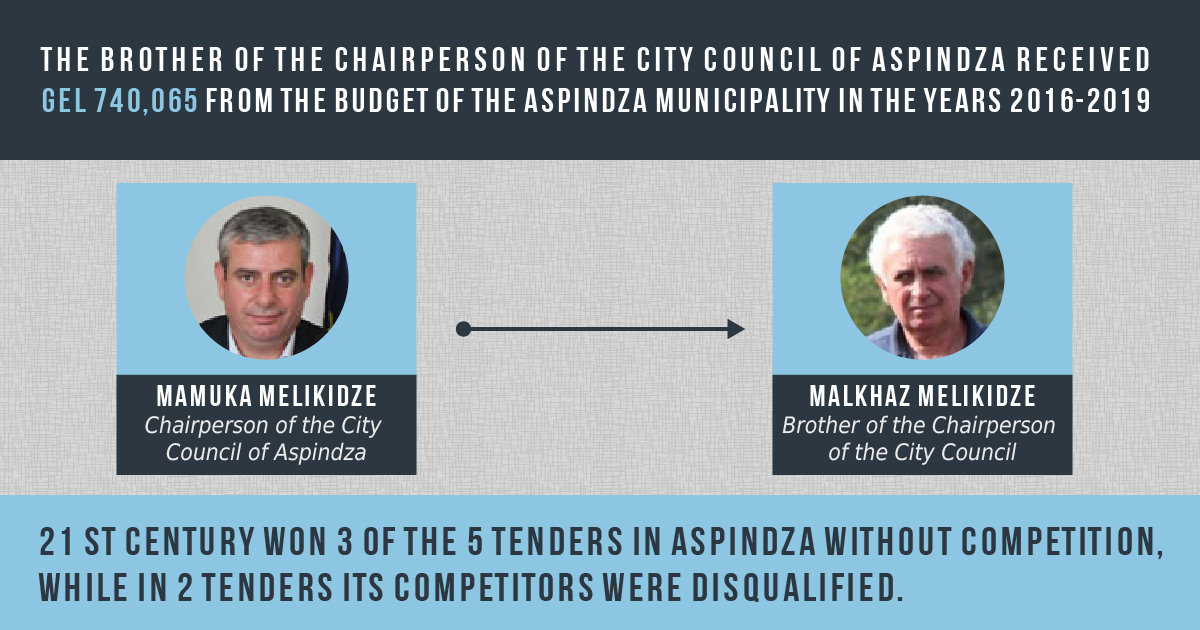 TI Georgia calls upon the Anti-Corruption Agency of the State Security Service and the Office of the Prosecutor General to study each of the procurements won by JSC 21st Century, Nukia LLC, and Nana Maisuradze and to establish whether these procurements were tailored to their interests and whether they involved signs of corruption.