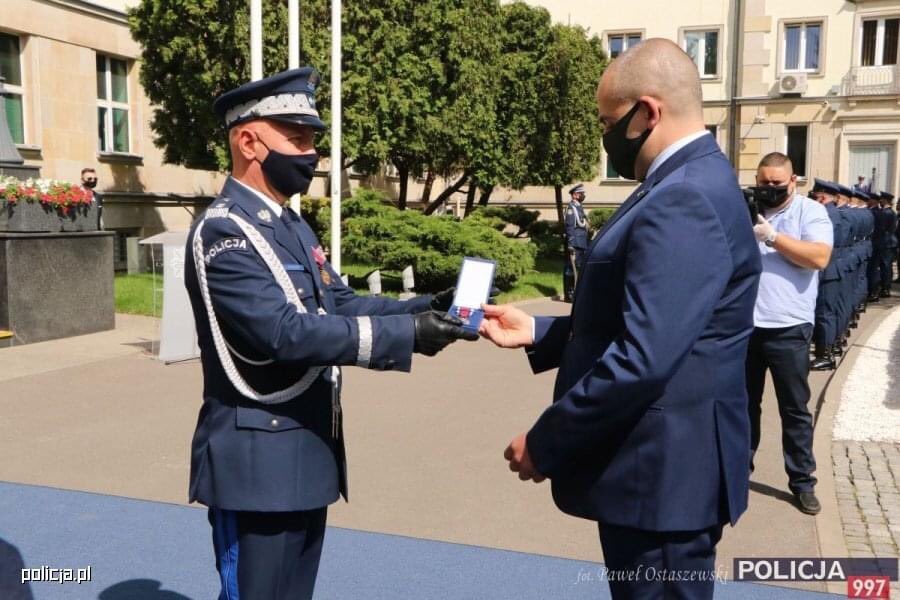 In accordance with the decision made by the Minister of the Interior and Administration of the Republic of Poland, Mariusz Kaminski, Georgian Police Attache to Poland, Colonel Giorgi Gamsakhurdia was awarded with silver medal at the event dedicated to the 101 anniversary of the Police National Day of Poland. Ambassador Extraordinary and Plenipotentiary of Georgia to the Republic of Poland - Ilia Darchiashvili also attended the event.

Giorgi Gamsakhurdia was awarded with medal during the solemn ceremony by the Chief Commandant of Police, Lieutenant General, Dr. Yaroslav Shimchik, who made special emphasis on the unique knowledge, professionalism and experience of Giorgi Gamsakhurdia as well as on his personal involvement in international persecution ( exchange of information, cooperation in trainings etc.) that will contribute to establishing friendly, open relations and close cooperation between the law enforcement agencies.

According to Yaroslav Shimchik, Colonel Giorgi Gamsakhurdia is particularly supportive of the work of the Polish police in connection with the crimes committed by citizens of Central and Eastern European countries in Poland, both in terms of operative and investigative activities. He cited Giorgi Gamsakhurdia’s participation in the detention activities of dangerous, armed and impulsive individual, wanted by the Russian federal law enforcement bodies, as an example of such cooperation, held on July 17, 2020. Detainee was in charge of the criminal organization involved in drug smuggling, car abduction, extortion and apartment robberies.

Yaroslav Shimchik noted that the officers of the Gdansk Voivodeship Police Command and the Anti-Terrorist Unit were able to detain the mentioned person thanks to the detailed measures elaborated by Giorgi Gamsakhurdia, and thus, the special operation turned out to be efficient and safely accomplished.

Ambassador Extraordinary and Plenipotentiary of Georgia to the Republic of Poland - Ilia Darchiashvili also attended the event dedicated to the 101st anniversary of the National Police Day of Poland on the basis of the invitation from the side of national police leadership of Poland. Ilia Darchiashvili and Giorgi Gamsakhurdia laid a wreath at the memorial of the fallen police officers and those who sacrificed their lived in Tver and policemen of Second Polish Republic, buried in Polish Military graveyard in Mednoe.

During the event dedicated to the 101 anniversary of Police National Day of Poland, Minister of Interior and Administration- Mariusz Kaminski, Chief Commandant of Police, General-Lieutenant Yaroslav Shimchik and his deputies lit a candle and laid a wreath at the obelisk dedicated to the fallen police officers- "The Fallen Policemen - Republic of Poland" as well as a memorial plaque at the main police headquarters. The national anthem was also performed at the ceremony.

A new Europol-led project, funded by the European Union, has been launched, focused on strengthening the capacity of Armenia, Azerbaijan, Belarus, Georgia, Moldova and Ukraine to fight organised crime more effectively. The project will contribute to reducing crime and creating a safer living space for citizens in the region. As part of a larger €10 million EU cooperation initiative, the EU has dedicated €2.5 million to support the project that will run for the next four years. Read more