The FINANCIAL - Germany and France allocate over €250 mln to Georgia 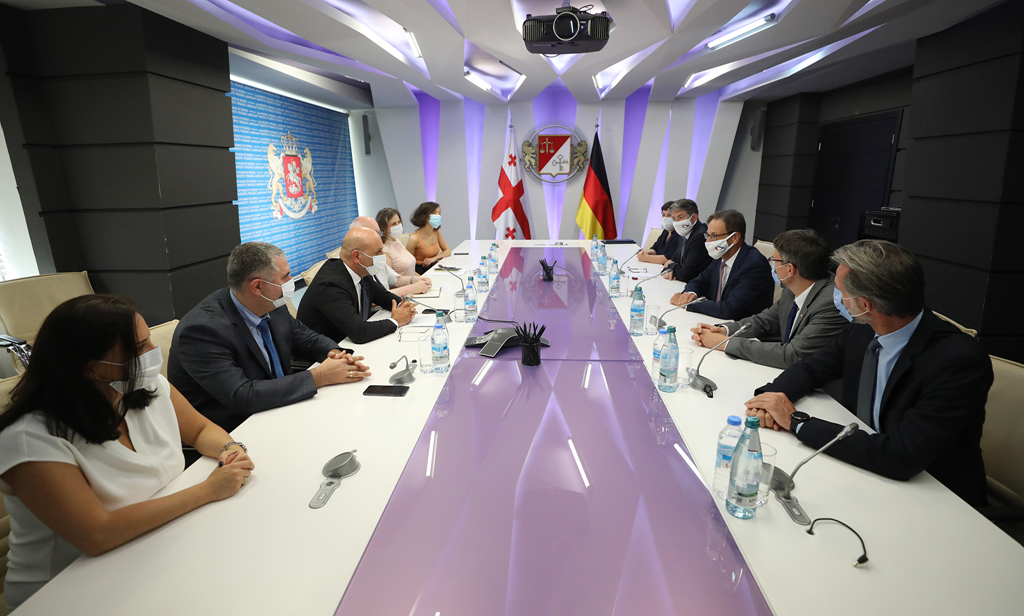 Germany and France allocate over €250 mln to Georgia
Share This

The FINANCIAL -- The French Development Agency and the Ministry of Finance of Georgia signed a EUR 58 million loan to finance the reconstruction of water and sanitation utilities in Khashuri. The activities financed under the loan will be supplemented by a EUR 7,15 million Grant from the European Union. Also, Germany will allocate a €170 million loan and a €28.5 million grant to Georgia as part of an agreement signed today between the governments of Georgia and the Federal Republic of Germany.

On July 31st 2020 the Minister of Finance of Georgia, Mr. Ivane Matchavariani, the Ambassador of France to Georgia, Mr. Diégo Colas, and the French development Agency (AFD) Head of the Regional Office for the South Caucasus, Ms. Gaelle Assayag, signed a 58M€ Credit Facility Agreement for the “Khashuri water supply and sanitation development project” to support the development of modern water supply and sanitation systems in the city of Khashuri. The signing ceremony took place with the participation of Mr. Dominik Papenheim, Team Leader at the EU Delegation to Georgia.

The project aims at the modernisation of the water supply and sanitation systems in the city of Khashuri. Today, water is supplied only during a few hours per day in this municipality and wastewater is discharged without treatment into a transboundary river, impacting negatively the environment, the local livelihood and the health of populations.

“With this project, France, through the Agence Française de Développement, and together with the EU, as “Team Europe”, will assist Georgia on its path toward a further modernisation of its infrastructure and even better implementation of EU standard in environment protection", underlined the Ambassador of France to Georgia, Mr. Diégo Colas.  Also, Ambassador of France hopes that this first cooperation between AFD and Georgia in the water sector will pave the way for future projects in this area, to achieve a greener and better world for all.

AFD is an inclusive public financial institution and the main actor in France’s development policy. AFD finances many sectors – agriculture, energy, health, biodiversity, water, transport and urban development, digital technologies, training – and supports the transition to a safer, more equitable and more sustainable world. Through its network of 85 agencies, AFD operates in 115 countries. In 2019, it earmarked more than EUR 14bn to finance these projects.

Since the opening of AFD regional office in Tbilisi in 2016, AFD and Georgia have established a flourishing collaboration that has led to an active portfolio of 480 million of euros of engagements, in the sectors of agriculture, energy, water, social protection and urban mobility.

Alongside France, Germany will also allocate a €170 million loan and a €28.5 million grant to Georgia as part of an agreement signed today between the governments of Georgia and the Federal Republic of Germany. To date, within the financial and technical cooperation with Germany, more than €1 billion in funding in the form of grants, technical assistance and soft loans have been allocated for Georgia, as reported by agenda.ge

According to the Georgian Ministry of Finance, the amount will be spent on urban development, tourism infrastructure, energy efficiency and environmental protection measures. “This project will be aimed at developing tourism and, at the same time, at protecting the country’s nature. We are grateful to the Georgian government for the cooperation that has been developing between the two countries over the years. I am glad that these projects will be carried out from next year, ”said Hubert Knirsch, according to Georgian Public Broadcasting.

Earlier this week, The Asian Development Bank (ADB) announced an investment of up to $20 million in green bonds to be issued by Georgia Global Utilities JSC (GGU), with proceeds to upgrade water supply and sanitation in Tbilisi and nearby municipalities, and to refinance debt of renewable energy and water operations. ADB will also administer a further investment of up to $20 million in the bonds by Leading Asia's Private Infrastructure Fund (LEAP).